Review:
The album was recorded in Liverpool during a series of sessions with members of The Coral and The Zutons. On its original release in 2004, Tales Told marked a departure from Ian’s previous work with The Lightning Seeds. Instead, Ian stripped his songwriting to its bare fundaments, drawing on personal events in his life to create an album of tender, lovelorn ruminations. Ian is best known for his work with The Lightning Seeds, whose debut single Pure heralded a run of well-loved hits which included Sense, The Life of Riley, Marvelous, Lucky You, Change and You Showed Me. With The Lightning Seeds, Ian was also responsible for the multi-platinum single Three Lions, which in 2018 made chart history when it enjoyed its fourth spell at number onethe most enjoyed by the same artist. Released in 2004, Ian Broudie’s Tales Told is a lost, lovelorn masterpiece which saw Broudie strip away all the ornamentation found on his best-known Lightning Seeds songs – alchemising the emotions of the “turbulent and uncertain years” preceding it into a work of deeply personal beauty. Other musicians featured on the record include members of The Coral and The Zutons. Tales Told is available with three tracks which aren’t previously unreleased. Speaking about its belated vinyl debut, Ian says, “I’m proud that Tales Told has been chosen as one of the records to launch Needle Mythology.” “Classy acoustic guitar replace the bouncy tones of his more popular compositions. Lead single Song For No One has a touch of sadness tinged to it. ‘I’ll touch the world with fingers crossed’ laments Broudie over dusted down percussion whilst his guitar shimmers in the foreground. Broudies voice has a similar tone to Robert Smith of The Cure. Unique in its style to deliver lyrics with empathy and diverseness. Broudie is obviously a lover of 60’s bands. Got No Plans treats the listener to a Zombies-esque openly British pleasant ditty. Super Cinema, an instrumental, starts off as A Day In the Life ends with searing violins, with a Hit The Road jack bass line. If you like the catchy nature of The Coral’s best hits, this will be right up your street.” 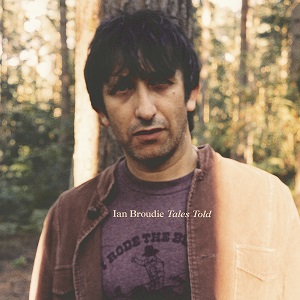