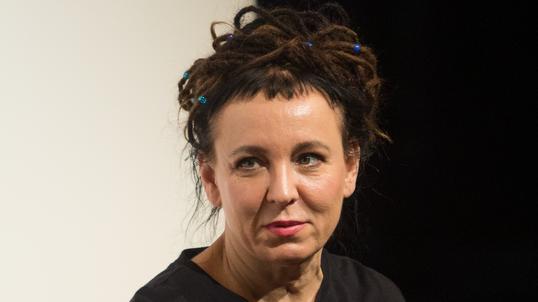 OLGA TOKARCZUK (b. 1962) is a Polish writer, activist, and public intellectual who has been described as one of the most critically acclaimed and commercially successful authors of her generation. She was awarded the 2018 Nobel Prize in Literature "for a narrative imagination that with encyclopedic passion represents the crossing of boundaries as a form of life."

Tokarczuk is particularly noted for the mythical tone of her writing. PRIMEVAL AND OTHER TIMES (1996) is set in the mythical Polish village of Primeval, a microcosm of the world populated by eccentric, archetypal characters and guarded by four archangels. The novel chronicles the lives of the inhabitants over the course of the feral 20th century in prose that is forceful, direct, and the stylistic cousin of the magic realism of Gabriel García Márquez.

HOUSE OF DAY, HOUSE OF NIGHT (1998), although nominally a novel, is more a patchwork of loosely connected disparate stories, sketches, and essays about life past and present in the author's adopted home, Nowa Ruda, a small town in Silesia. Each of the individual stories represents a brick and they interlock to reveal the immense monument that is the town. Even though arguably Tokarczuk's most "difficult", at least for those unfamiliar with Central European history, it was her first book to be published in English.

Set between the 17th and 21st centuries, FLIGHTS (2007) is a philosophical rumination on modern-day travel. It is structured as a series of vignettes, some fictional, and some based on fact. The novel won the Nike Award, Poland's top literary prize, as well as the 2018 Man Booker International Prize, marking the first time a Polish author received the award.

Her most recent book in English translation, DRIVE YOUR PLOW OVER THE BONES OF THE DEAD (2009), is a provocative exploration of the murky borderland between sanity and madness, justice and tradition, autonomy and fate. Whom do we deem sane? it asks, and Who is worthy of a voice? The English translation has received critical acclaim, shortlisted for the 2019 Man Book International Prize, and a finalist for the 2019 National Book Award.


The following books are in ePUB format unless otherwise noted:

Tokarczuk, Olga Critical Assessments Drive Your Plow Over the Bones of the Dead Flights House of Day, House of Night Primeval and Other Times