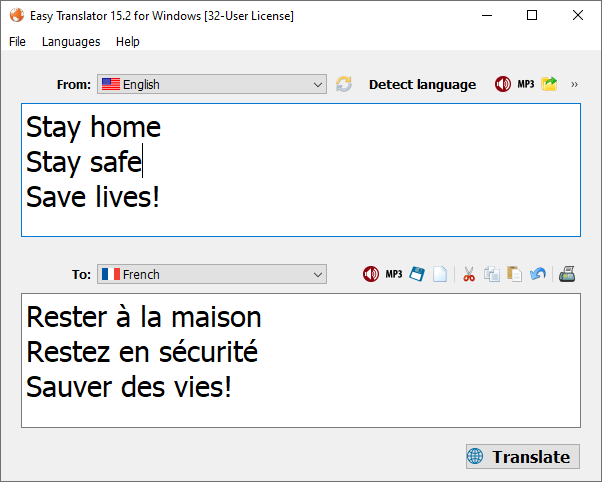 Easy Translator for Windows employs the power of Internet machine language translation engines, and enables you to easily translate Web contents, letters, chat, and emails between major International languages. Easy Translator is a small software utility that can help you make several translations between multiple languages. This app comes in handy for all users who need to translate documents on the go. It sports a simplistic interface and a clean layout. Easy Translator only packs some basic features that can help you make several translations pretty easily.

Not only does this tool allow you to paste the text directly into the main window, but you can open several documents with different file formats. It also offers an extensive list with many languages that you can choose from.
After you have added the text that needs to be translated into the dedicated dialog, the app can automatically detect the language. Easy Translator provides several features for making the entire process much easier and it allows you to copy, cut, paste or save the input text.

It offers a text-to-speech support that can help you learn how words are pronounced in several languages.
The application also includes another useful feature that allows users to convert the input texts to MP3 files so you can listen to them anytime you want. It is also possible to print the translations.

It is important to know that keyboard shortcuts are also available but they cannot be assigned.
Overall, Easy Translator is a small but efficient tool that performs translations between multiple languages. It’s easy to work with and no computer skills are required to master this tool. It only packs standard features for dealing with the translation process so it cannot compete with other powerful tools on the market.

Whats New:
The new version 15.3 supports translation between 104 languages, and with text-to-speech (TTS) support for 59 languages, which makes it an ideal language learning app as well.