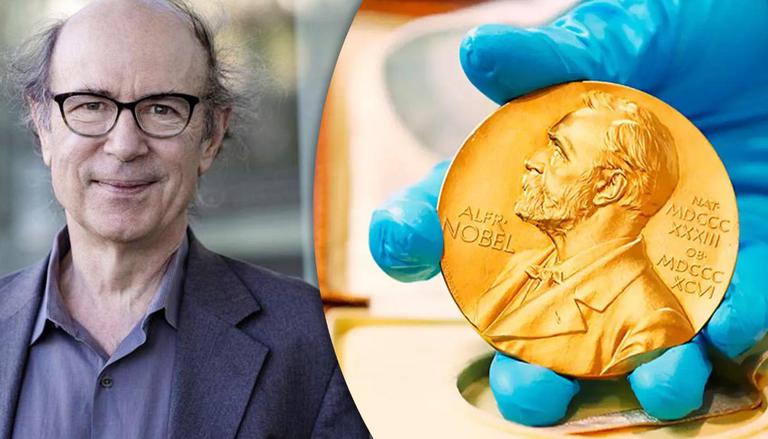 FRANK WILCZEK (b. 1951) is an American theoretical physicist and mathematician renowned for his boundary-pushing investigations into the fundamental laws of nature.  He is currently the Herman Feshbach Professor of Physics at the MIT Center for Theoretical Physics.  In 2004, he shared, with David J. Gross and H. David Politzer, the Nobel Prize in Physics "for the discovery of asymptotic freedom in the theory of the strong interaction."

In the early 1970s, while a graduate student working with David Gross at Princeton University, Wilczek (together with Gross) discovered asymptotic freedom, which holds that the closer quarks are to each other, the less the strong interaction (or color charge) between them; when quarks are in extreme proximity, the nuclear force between them is so weak that they behave almost as free particles.  The theory, which was independently discovered by H. David Politzer, was important for the development of quantum chromodynamics (QCD), and forms the key to the interpretation of almost all experimental studies involving modern particle accelerators.

Wilczek has made seminal contributions to fundamental particle physics, cosmology, astrophysics, condensed matter physics, and the quantum theory of black holes.  His research interests include Axions, Anyons, and Time Crystals, concepts in physics which he named and pioneered.  Each has become a major focus of world-wide research.

His books for general audiences have been praised for being at once profound and light, filled with humour, wordplay and original explanations of difficult concepts.  His nontechnical language is devoid of mathematics and theoretical proofs, and rich in personal reflection and historical context.  Freeman Dyson, writing in the New York Review of Books, described Wilczek as "one of the most brilliant practitioners of particle physics...  He writes as he thinks, with a lightness of touch that can come only to one who is absolute master of his subject."

FUNDAMENTALS: TEN KEYS TO REALITY (2021), his most recent book, investigates the ideas that form our understanding of the universe: time, space, matter, energy, complexity, and complementarity.  Synthesizing basic questions, facts, and dazzling speculations, Wilczek excavates the history of fundamental science, exploring what we know and how we know it, while journeying to the horizons of the scientific world to give us a glimpse of what we may soon discover.

Wilczek is a regular contributor to Physics Today and to Nature, explaining topics at the frontiers of physics to wider scientific audiences.  In addition to the Nobel Prize, Wilczek has received numerous other honours including, in May 2022, the Templeton Prize for work that reveals "a vision of a universe that he regards as embodying mathematical beauty at the scales of the magnificently large and unimaginably small."


The following books, and more than 350 (unitemized) academic papers, are in PDF format unless otherwise noted:

A Beautiful Question Bibliography and CV Fantastic Realities Fundamentals Geometric Phases in Physics [ed.] Lightness of Being, The Longing for the Harmonies Miscellaneous Papers