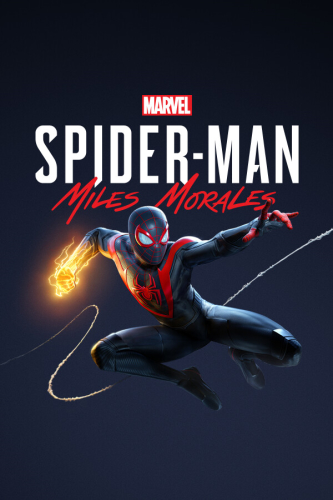 Following the events of Marvel’s Spider-Man Remastered, teenager Miles Morales is adjusting to his new home while following in the footsteps of his mentor, Peter Parker, as a new Spider-Man. But when a fierce power struggle threatens to destroy his new home, the aspiring hero realizes that with great power, there must also come great responsibility. To save all of Marvel’s New York, Miles must take up the mantle of Spider-Man and own it.

The Rise of Miles Morales : Miles Morales discovers explosive powers that set him apart from his mentor, Peter Parker. Master his unique, bio-electric venom blast attacks and covert camouflage power alongside spectacular web-slinging acrobatics, gadgets and skills.
A War for Power : A war for control of Marvel’s New York has broken out between a devious energy corporation and a high-tech criminal army. With his new home at the heart of the battle, Miles must learn the cost of becoming a hero and decide what he must sacrifice for the greater good.
A Vibrant New Home : Traverse the snowy streets of his new, vibrant, and bustling neighborhood as Miles searches for a sense of belonging. When the lines blur between his personal and crime-fighting lives, he discovers who he can trust, and what it feels like to truly be home.

PC Optimized Graphics : Enjoy a variety of graphics quality options to tailor to a wide range of devices, unlocked framerates, and support for other technologies including performance boosting NVIDIA DLSS 3 and NVIDIA DLSS 2, image quality enhancing NVIDIA DLAA, and latency-reducing NVIDIA Reflex. Upscaling technologies AMD FSR 2.1, Intel XeSS and IGTI are also supported.
Ray-traced reflections and shadows : See the city come to life with stunning ray-traced reflection and ray-traced shadow options with a variety of quality modes to choose from.
Ultra-wide Monitor support : Take in the cinematic sights of Marvel’s New York with support for a range of screen setups, including 16:9, 16:10, 21:9, 32:9, and 48:9 resolutions. 48:9 resolutions with triple monitor setups are compatible with NVIDIA Surround or AMD Eyefinity.
Controls and Customization : Feel what it’s like to play as Spider-Man through immersive haptic feedback and dynamic trigger effects using a PlayStation DualSense™ controller on a wired USB connection. Enjoy full mouse and keyboard support with various customizable control options.